Walking in the high Alps 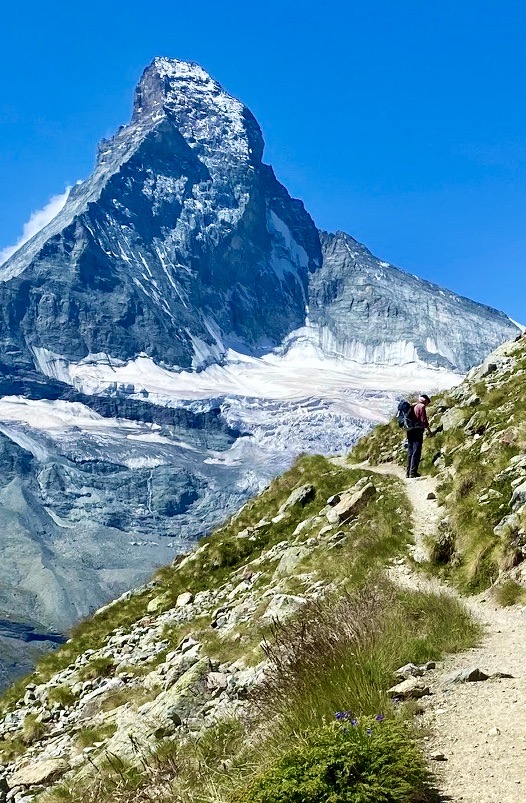 Peering at and through plants with an insect eye is the top trick of the photography in Henk Gerritson’s Essay on Gardening.  It is an  on-your-hands-and-knees view of nature.   The colour copy of this book will cause drooling over the flowers  and  the planning a fantasy trip to the Carpathian Mountains.

You could however stop short of that and go to the Alps instead.  Walking at high altitude waits for snow melt and thus has a short season.  The alpine cabins don’t open until 30 June and they close up for the season in mid September.  There is a 10 week window. 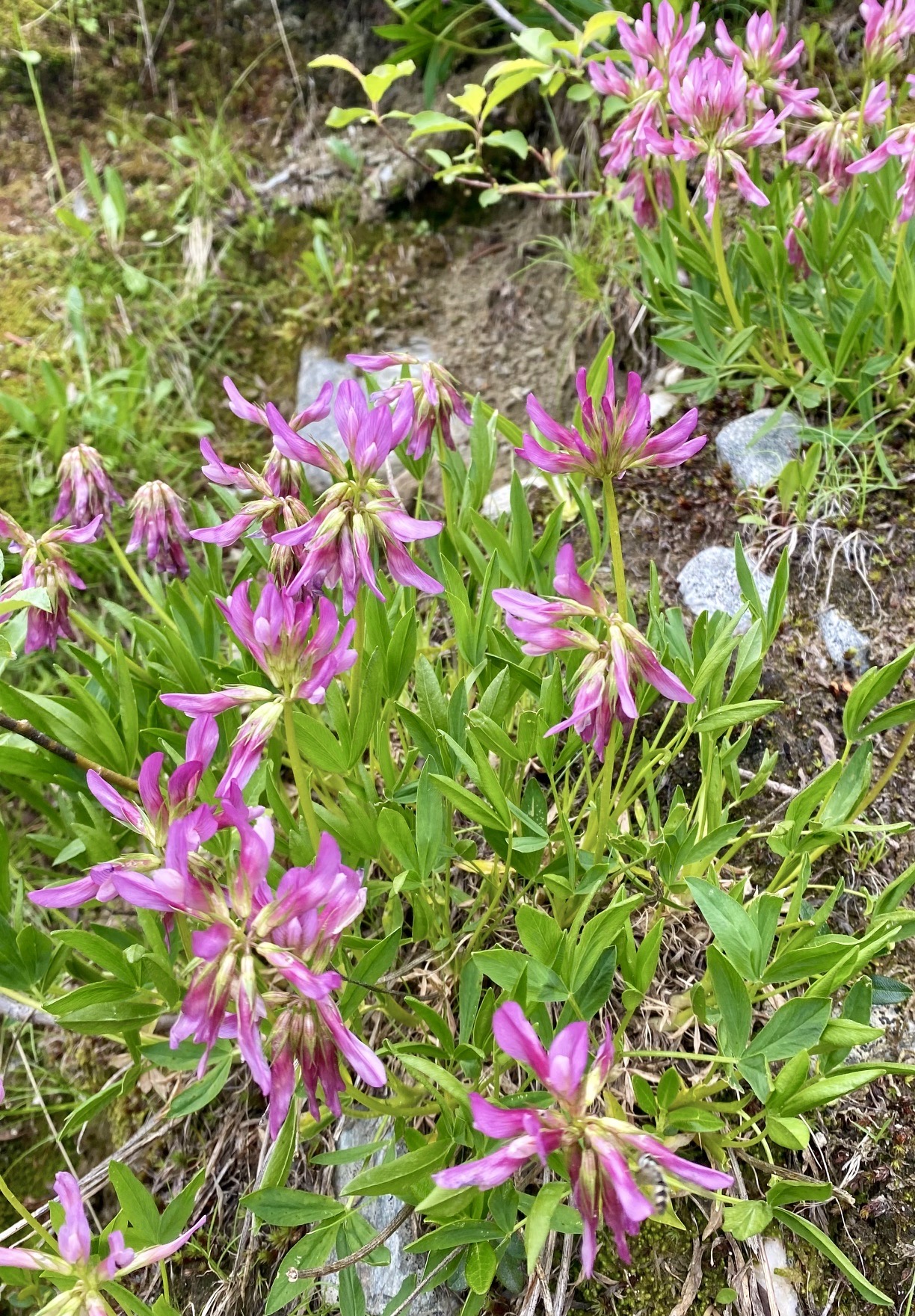 There are many walking routes in the Alps - the Haute Route is the one we chose.  It  takes 11 days to walk between Mont Blanc from Chamonix to the Matterhorn at Zermatt.   The guide books by Cicerone Press make the planning easy.    Accommodation is a mixture of huts, dormitories and hotels.  We didn’t meet anyone who was carrying camping kit - the tipping point in baggage carrying. 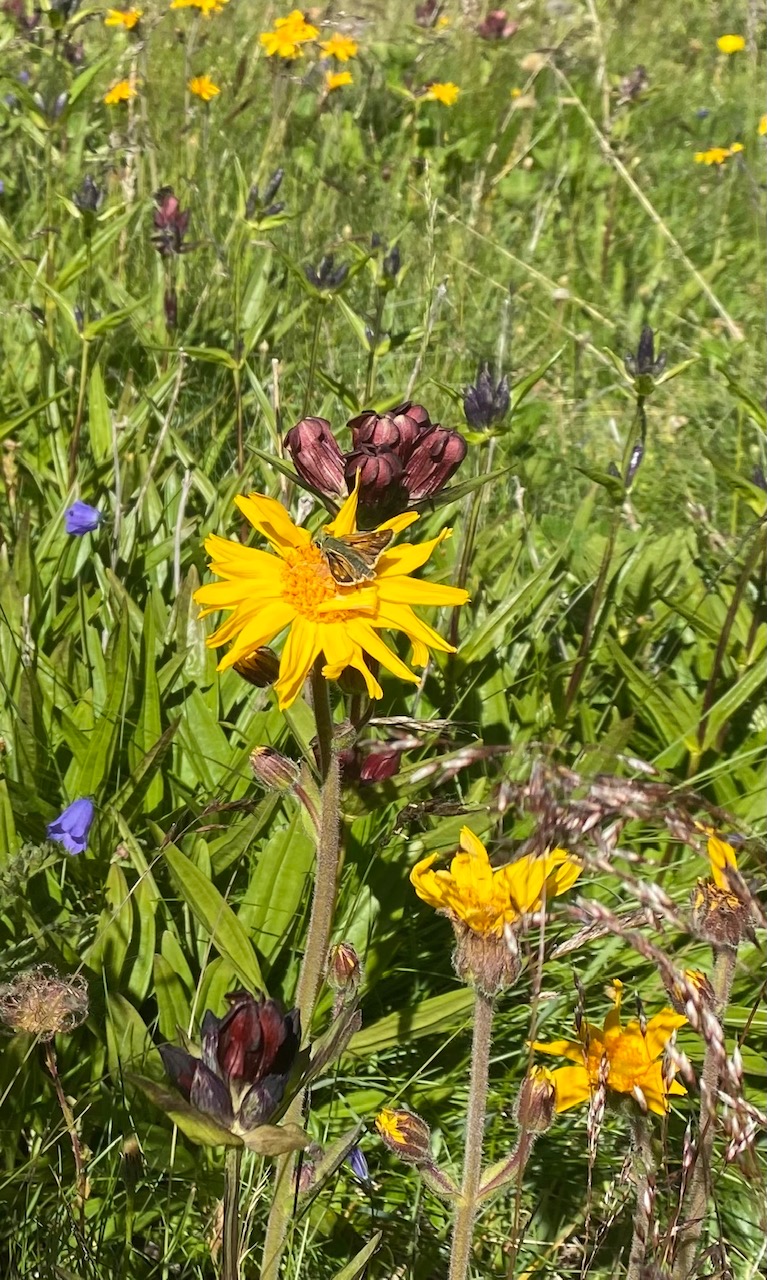 There is a magical quality to putting the minimum essential possessions into the smallest possible rucksack and travelling on foot between one place and another.  You are reliant on all that you have and yet these possessions are so minimal.  I had a  rucksack of 20 litres weighing round about 7 kilos.

The point of the walk was to see alpine meadows. mountain peaks, to walk 225 km and cross 11 passes - the up and downing is in the region of 4000 metres.   We started out on July 3rd, taking 4 trains to get us from London to Chamonix.  We arrived on the breath of black clouds and lay in our wooden-lined chalet room listening to electric storms rolling round the valley.

The rain bounced hard like silver fish on all the stone surfaces, battering on roof and windows. 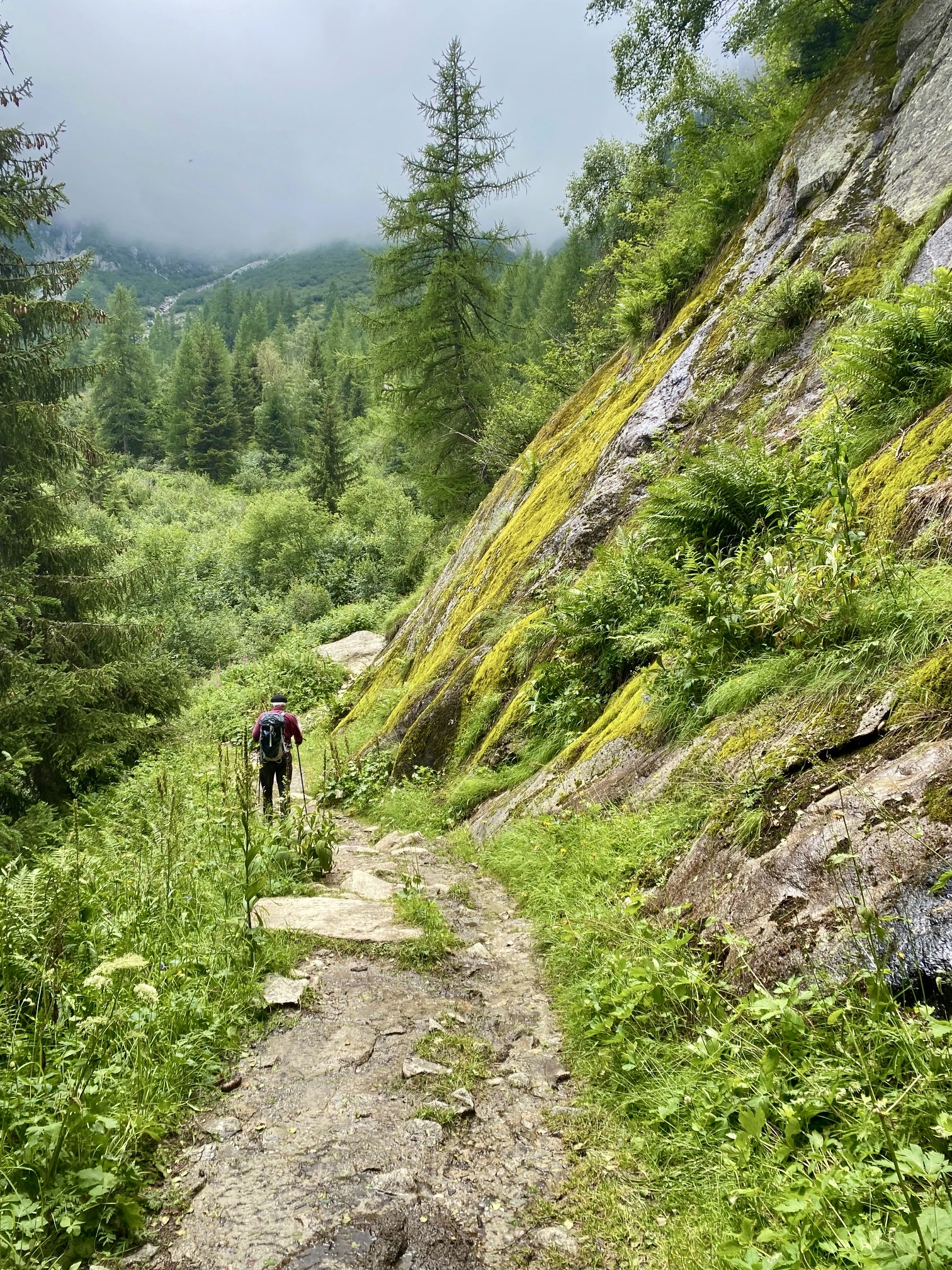 We cowered, prayed for  weather change and played our expectations in our mind:  Milka chocolate wrappers with the cow,  an overprint of ski resorts and other fond memories.   Raclette, fondue and cuckoo clocks coupled with the sure knowledge that being over 60 and coming from the flat lands of East Anglia, that we would be in for a tiring start.  We were completely unprepared for the flora of the high places.

Day one out of Chamonix and we cheated, the Swede in Argentiere suggested we clip two hours off our hike.  Simple: two train stops up the valley  to Vallorcine and a cablecar to Col de Posettes.   We had made our first col, perfectly in breath from there we took to our feet and were in our immersive botany lesson.  This continued like an unrolling quadrat for our almost our entire time in the mountains. 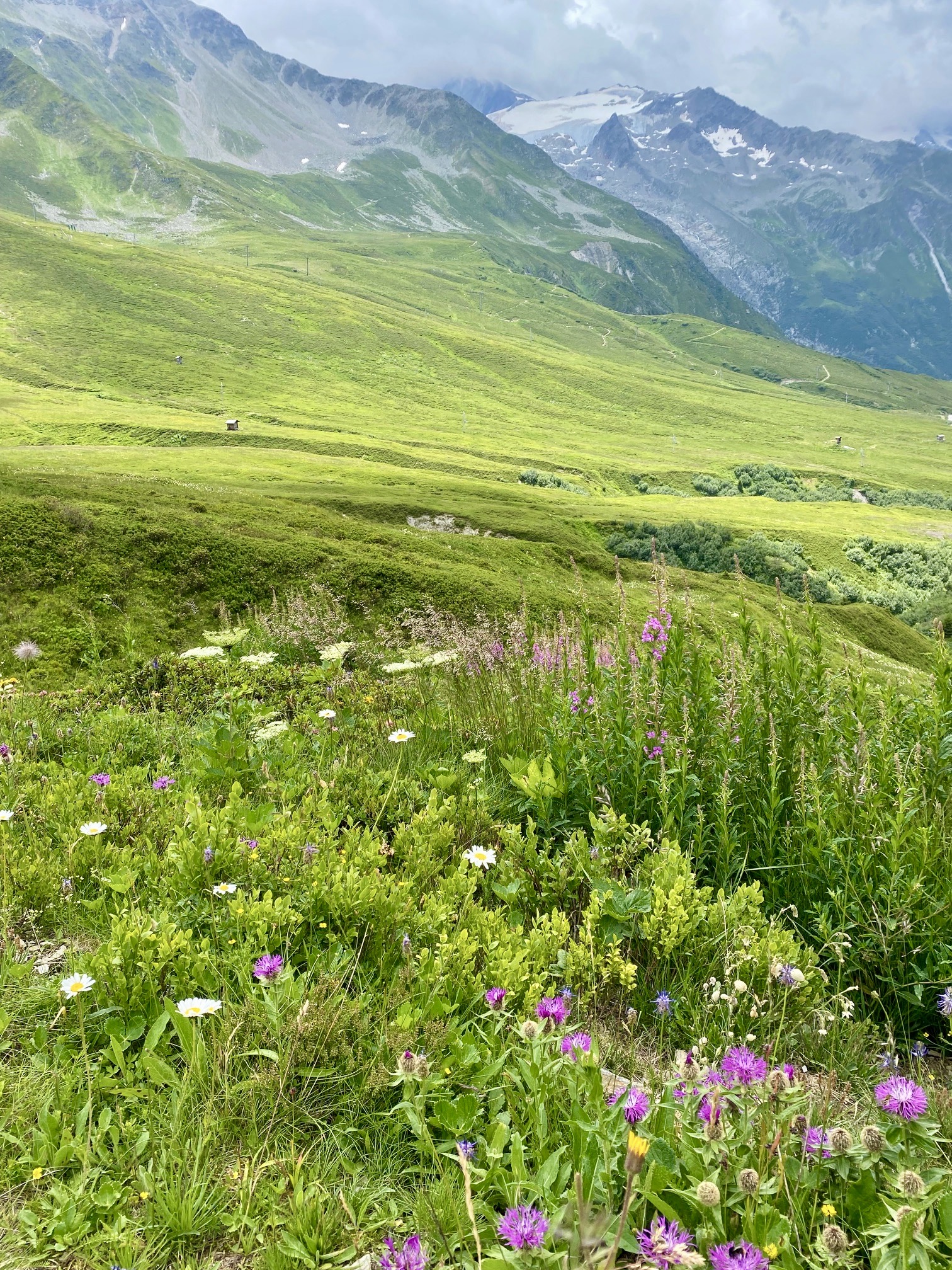 The first plants we saw and could ID  were Cirsium spinossisimum and little sedums and campanulas.  As a pretty clear gauge of altitude gentians would creep in over a certain height, truest blue and colonising little patches of snow melt.  Silene vulgaris was there - a familiar plant from the shingle coastal desert of Suffolk,  taking advantage in the Valais  alps of a little micro climate.

The  descent takes the walker down to Trient via the pass  the Col de Baume which provide creased north facing slopes  with large patches of Gentiana purpurea - not a blue one but darkest red, a bit sinister and entirely engulfing any nectar seeking bee.  There were also great clumps of  purple-headed Adenostyles alliariae, flowing together with  torrents of white  Aconitium lycotonum.   To stare at the colourful colonising was a mesmerising thing.  Pretty much wherever you looked on the hill (and there were exceptions of high level desert), there would be a thatch of  woven plant cover,  constantly changing in response to micro climate. 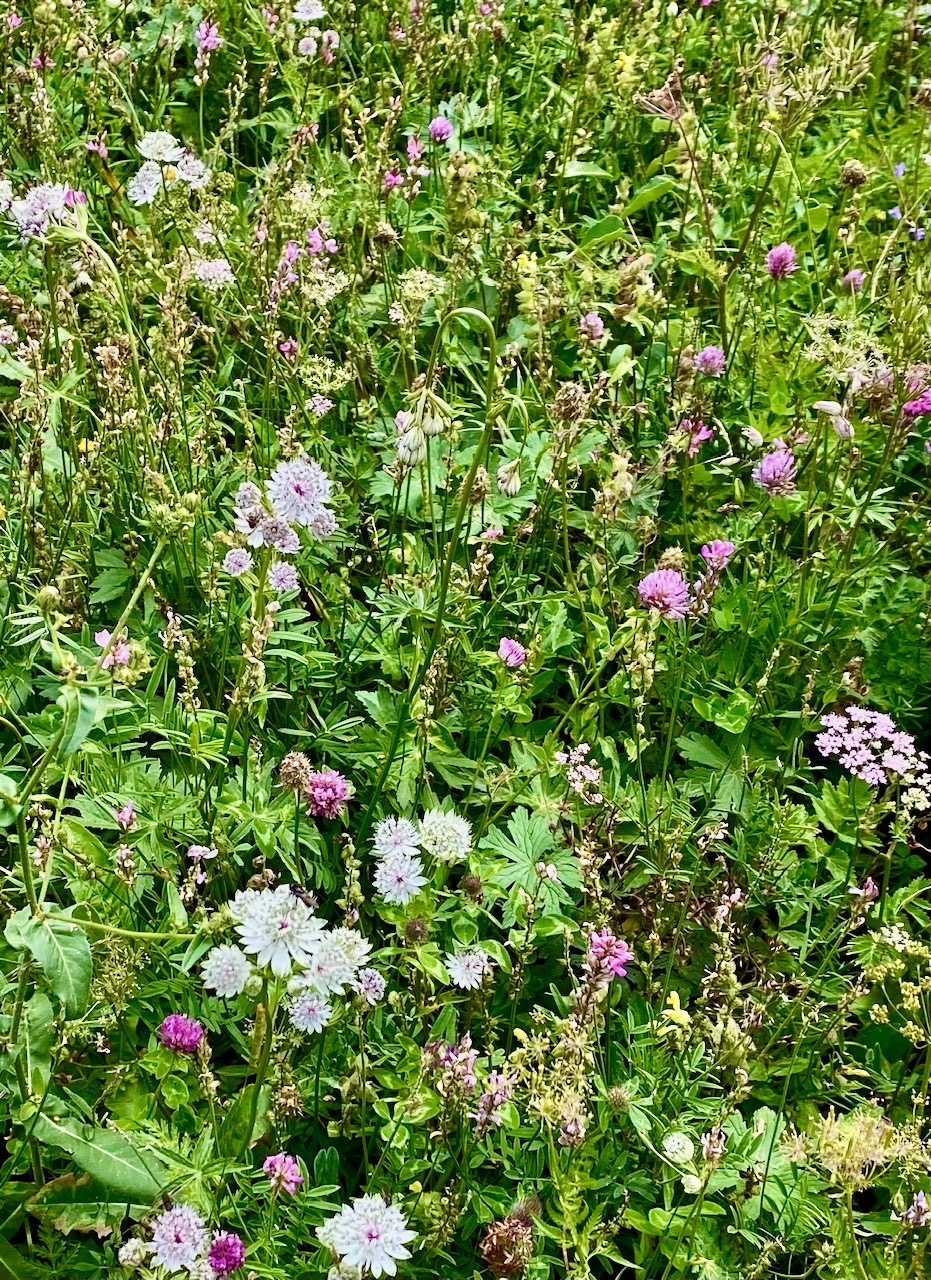 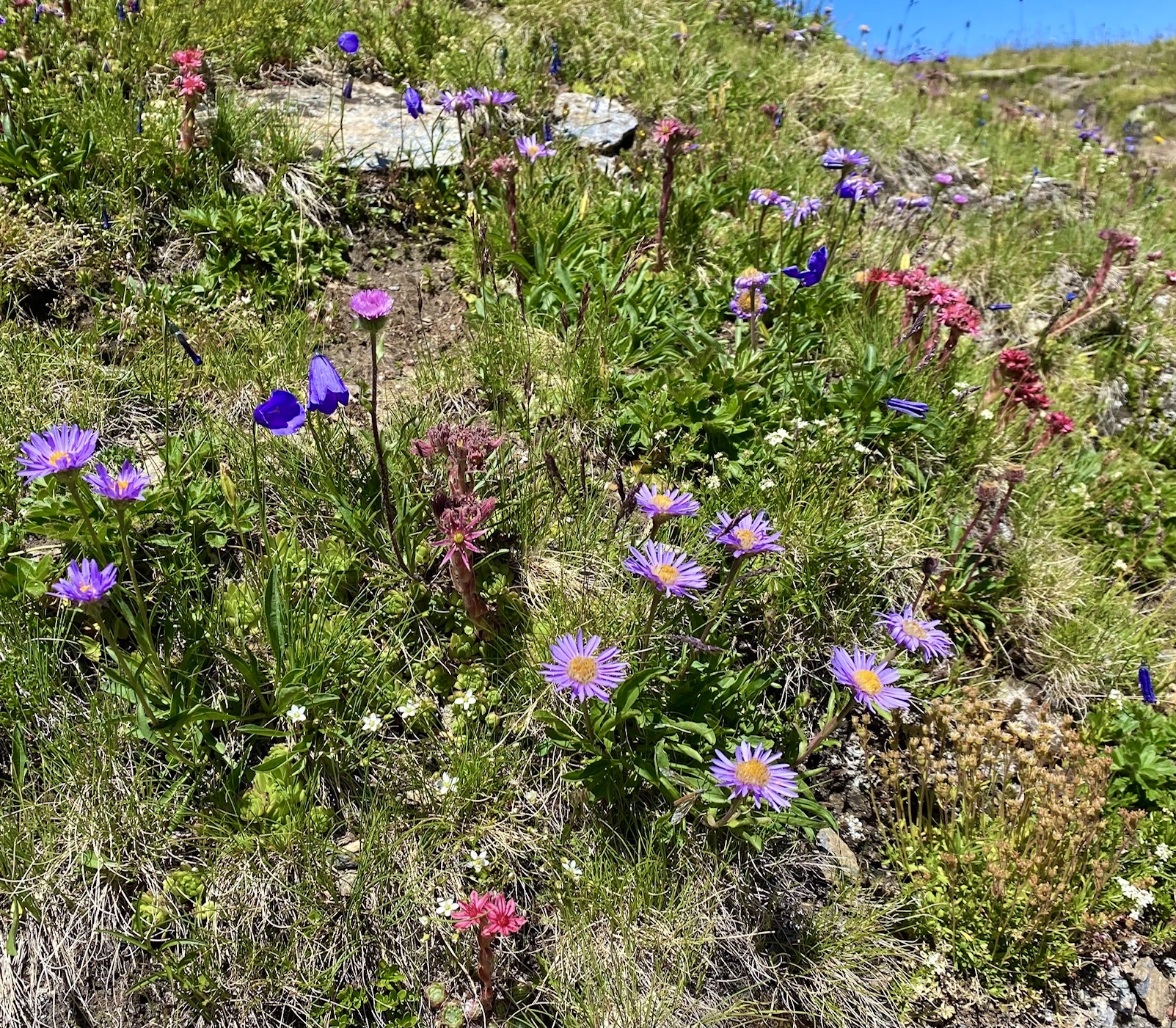 As we came down to the first Swiss  grazing pastures we saw scabious, pimpinella, astrantia, wild carrot, Alchemilla alpina  and campanula all dancing together with a giant form of alpine clover.   The  next valley was hung with cloud - the perfect environment for lichens and moss and picking our way over glacial melt and roller boulder we saw saxifrages  and ferns: polysticums, blechnums and aspleniums. 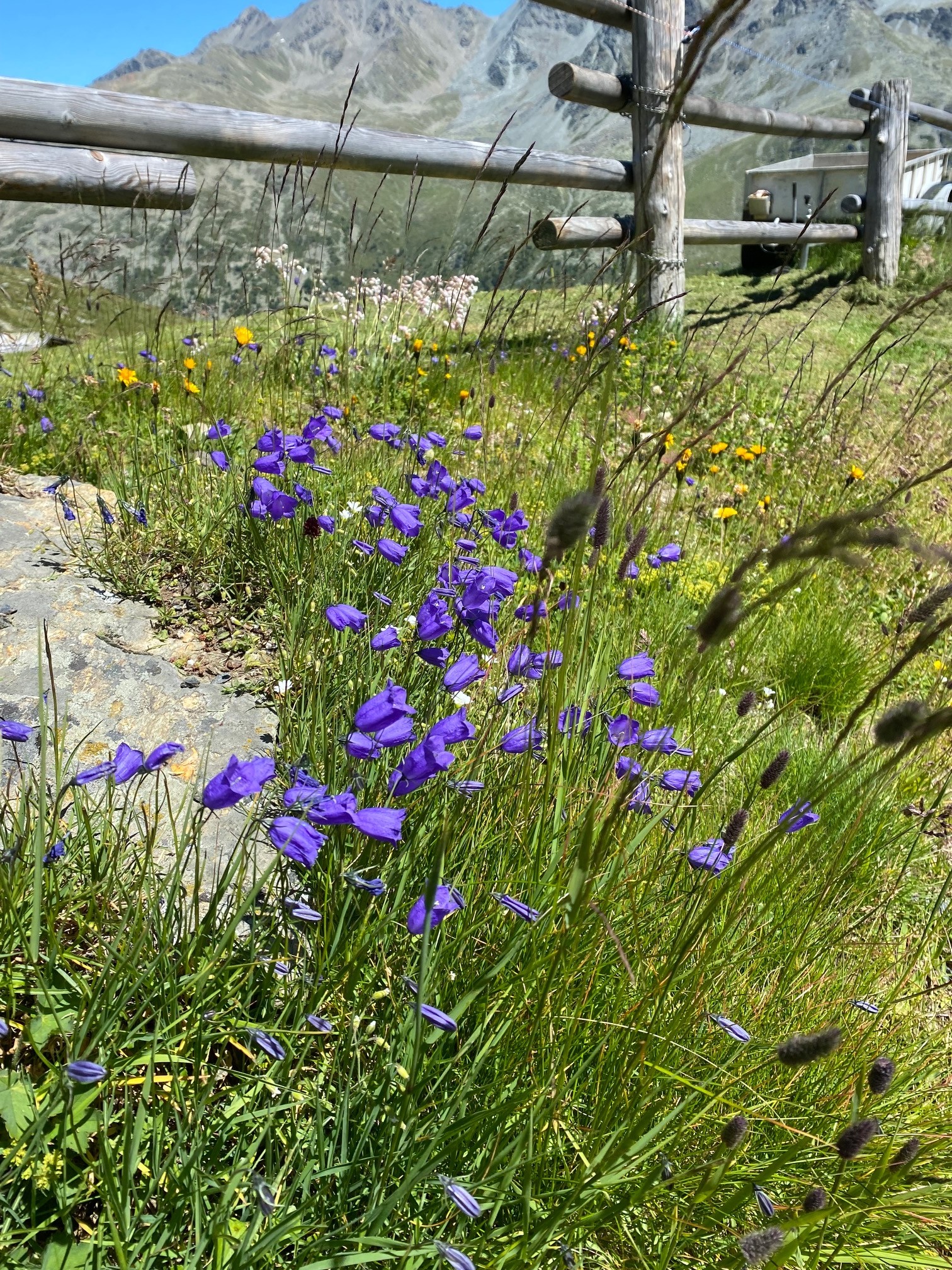 Some  trekkers were running up and down the mountains:  for us it was not like that.  We  had to look out for for the path  the whole time, alert for loose rocks, unstable scree.  However, plodding up the hill, eyes to the ground, we were eyeballing  the complex beauty of the native flora unfolding beside  our boots:  sometimes mini fairy gardens, sometimes patches of orchids with meadow geraniums, embroidered mounds of moss, or orange dandelions Crepis aurea and, best of al the blood red pyramid of Nigritella rhellicani, the black vanilla orchid. 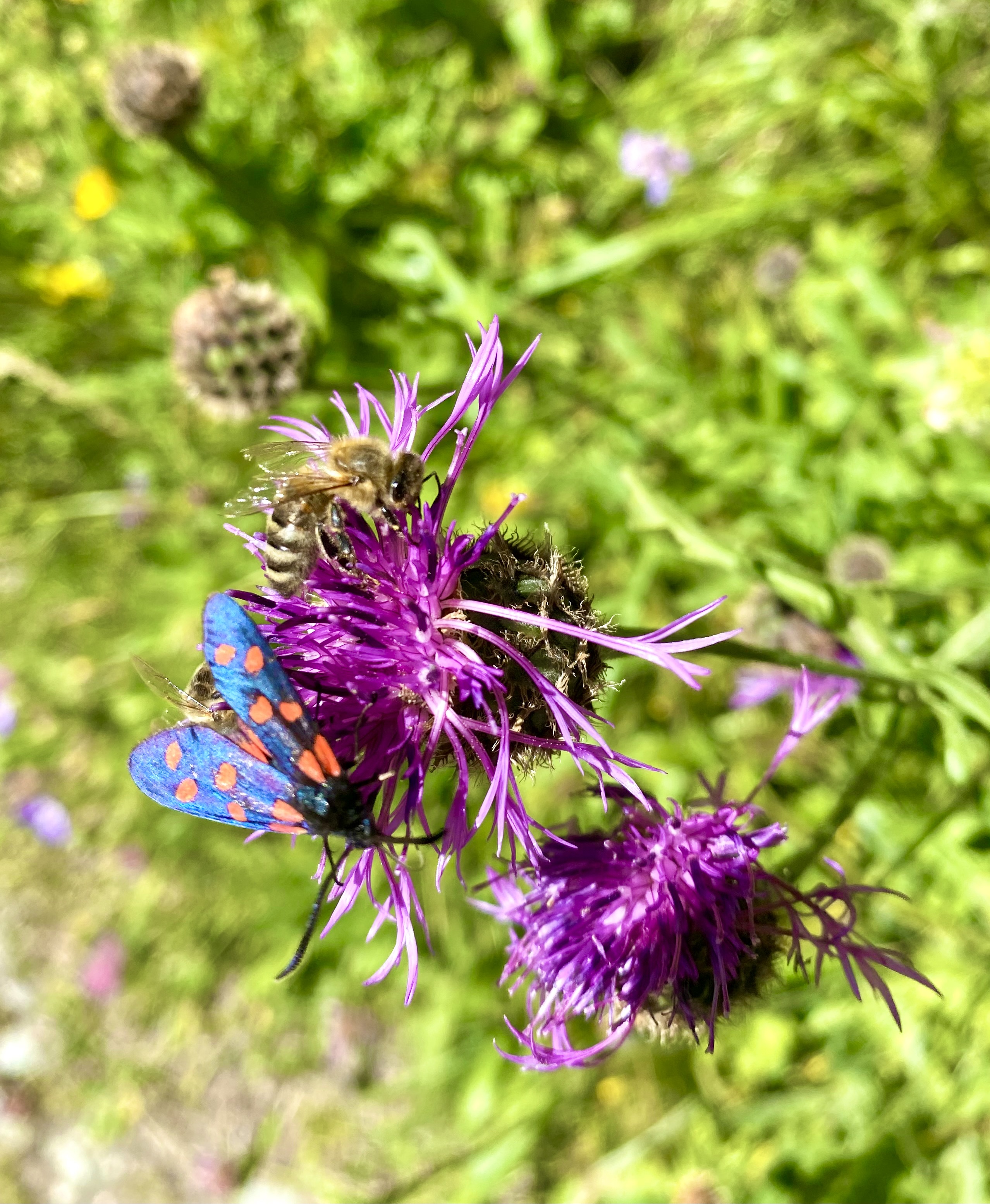 Slow uphill progress gave plenty of time to stare in like a nosey insect.  Or rather we were insect observers:  the bumblebees and crickets drinking, singing, mating, collecting nectar.  Butterflies congregated in clouds. Lower slopes with afternoon sun were awash with them on orchids and scabious.  There were also wild strawberries and wild raspberries.

We crossed through herds of cow as we climbed in and out of different valleys.  Always leather collar and bell round the neck - some with cowherds and dog and others kept to their grazing regime by electric fences.  Under their hooves the richest of alpine flowers.  Milk and cheese were large ingredients on the evening menus. You could taste the pasture. 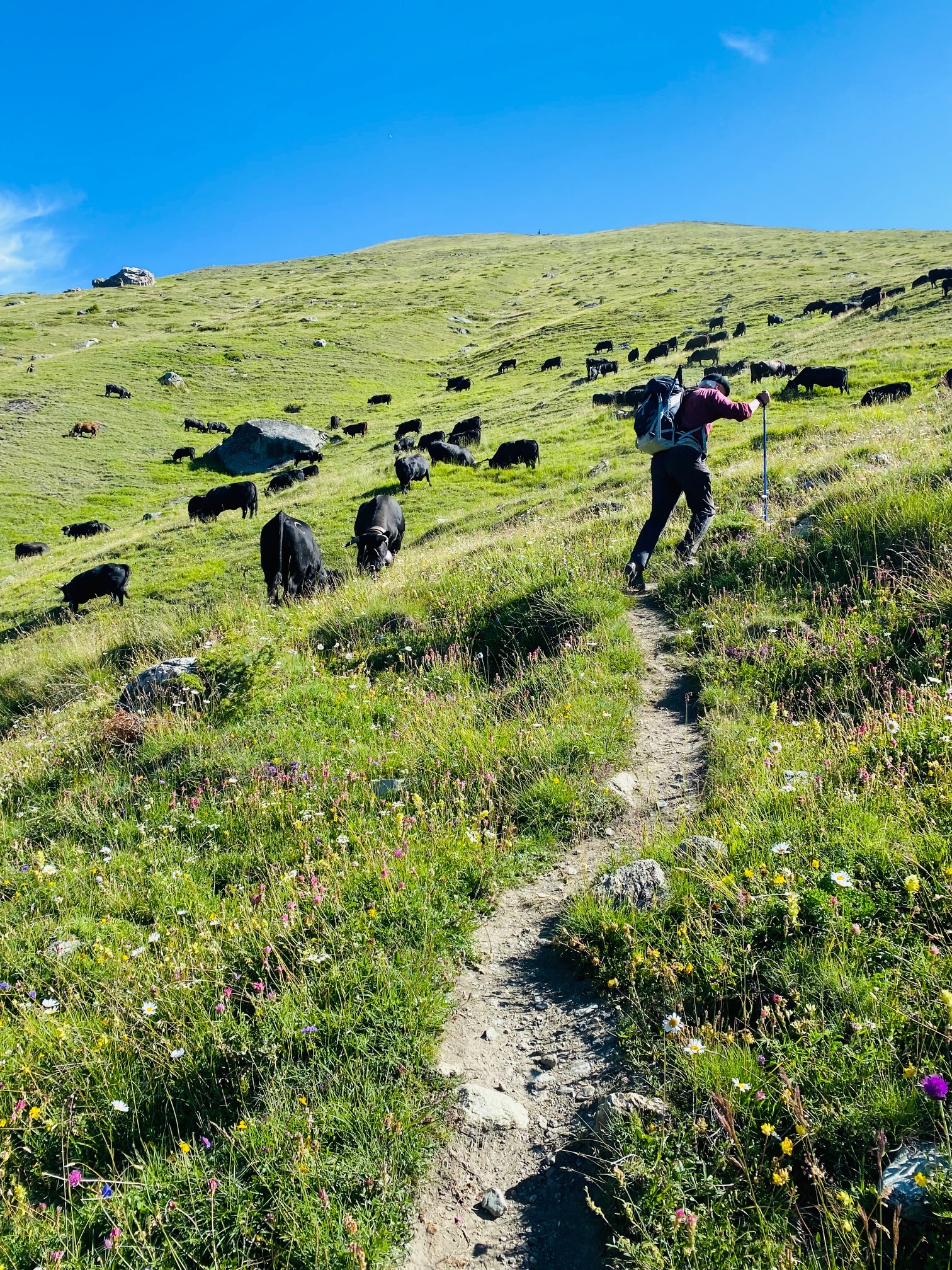 It felt as if we had dropped into a place where climate change was on pause.  Alas no:  even sitting in front of the Matterhorn watching a pair of golden eagles spiral on the thermals, the heat is on.  The black vanilla orchid is losing its habitat, the ibex and marmots must climb higher.

When we talked  to the men of the mountains they spoke of the lack of rain, the accelerating seasons and the glaciers retreating fast.  We could read these facts in the mountains as we passed through. But none of this diminishes the shock and wonder of seeing nature left to herself, how she artfully  garnishes and works the landscape.  Free of human interference,  (agribusiness, chemicals etc) there is a Paradise to be seen. 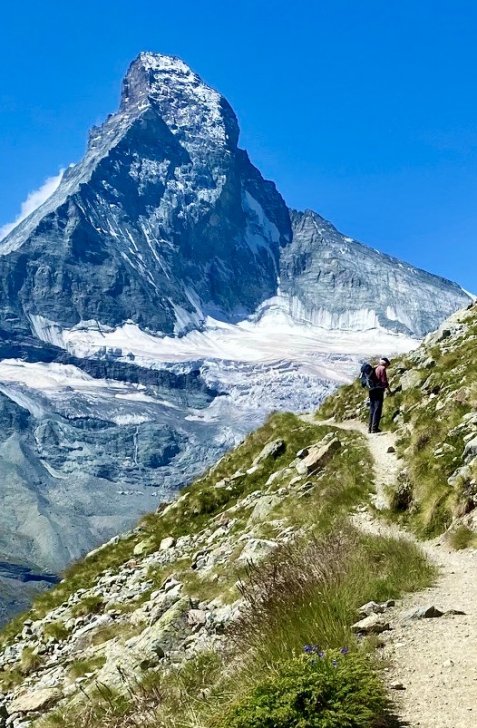