Masked up and socially distanced Evensong in Canterbury Cathedral was followed by a blessing from a bearded canon on the spot that once housed Thomas A Beckett’s shrine.

The beginning of a pilgrimage to Santiago.  A short week in August to line us up on France for next time.  For now, Canterbury to Newhaven –  4 nights and 80 miles.  Average daytime temperature 34C with what the met office calls Tropical Nights.

We’d  caught four trains to get us to Canterbury West and stayed in Burgate Street. The hotel had slightly scuzzy rooftop views over the cathedral.  It was a hot and noisy spot.  Up the street and behind a thick sheet of glass is the tomb to John Whitfield 1635-1691, eminent burgher and inventor and donor of two fire engines.  The church of Mary Magdalen houses his tomb in the tower and it provides an elegant backdrop for an all day all night drinking party on the parched grass outside.

Henry VIII, the Luftwaffe and the planners had taken their toll.  Add the surge of coronavirus to leave a retreat from retail with fast food and drink teetering to survive.  Subway has painted its jettied building in house yellow and green but down at heel is the feel.

For a starter, I’ll give a shout out for Ordnance Survey maps which read us our journey before, during and after. Also to husband for map reading.   The skill is to link up a a south westerly route to use footpaths wherever possible and to shun roads other than country lanes.  I think both OS maps and public footpaths are top British things.

A few more practical details:   we carry what we need – which is very little as we had booked pub/hotel/friends’ hospitality.   Water is the heaviest thing.  The daily route is planned to find breakfast and then lunch.  We start early and get two-thirds done by lunchtime.  This gets the walker ahead of the heat and allows for afternoon siestas under trees.

Day one walking took us on tinder-dry water meadows of Canterbury – along with early walkers, cyclists and dogs.  The far bank of the river has tidy establishments with St Georges flag, neat pontoons and early risers in easy chairs taking the morning rays.

Up and down hot fields, crops frazzled and waves of  heat covering us like cling film.  I’ve just looked up crime rates in Kent and they are low – nonetheless there is a  local siege mentality of threatening notices with bristling cameras  and razor wire topped fences.  It was a welcome contrast to find a notice inviting us to take an apple out of a basket by a gate.

Arrived at breakfastless Chilham where the  castle dominates, fronting onto town square and taking in the sweep of land behind.   Built by 1616, Sir Dudley Digges, a successful speculator in  the new world – Virginia and other lands abroad  – and effective parliamentarian.

The walker takes a steep lane down beside the  primary school,  past the Elephant House and huge patches of gunnera.  Chilham wall takes the gradient and delivers the path up to Kings Wood. Here’s what the Friends have to say:

King’s Wood forest extends for about two square miles between the villages of Chilham, Challock and Boughton Lees. It sits at the top of the North Downs and spreads into valleys with ancients woodlands of oak, lime, ash, hornbeam and yew. More recent economic crops include chestnut, fir and beech trees. King’s Wood is home to many wildlife including fallow deer, dormice, bats, and nightjars, reptiles and amphibians.

Timber work is an efficient business here and we walked past several miles of coppiced chestnuts.

At last down a chalk escarpment and past two sweating monks on their way from Winchester, Thrown upon the heat of the day, we welcomed a remarkable spreading yew in the graveyard of Boughton Aluph.

The other Boughton has a very busy cricket pitch, shimmering in the day’s heat and The Flying Horse pub for lunch time stop over.  Past a chalk pit and and a mile or two on past a massive sand pit taking up the entire view and plying sand by the lorryload.    We passed by courting couples, hungry sheep and through desiccated pasture land.  A night in a pub with outbuilding newly renovated and a white fan as our guardian angel.

Day two across the M20 roaring down to the Channel tunnel – railway escorting it.  How the knives of transport have sliced up Kent and it took an hour to get the whine of traffic away and in the still of small villages we trod quietly under bedroom windows with that in the background

Breakfast is Headcorn and on the lane in we could read lifestyles from litter from passing cars.  The village at the core, where the orchestra  was practising on the green,  had been partially   swamped by new housing.  A side lane through a gate near the church took us across a secret lane, paved with old gravestones

Now we are in the land of villages ending in dens (referring to little clearings in the forest) and from Frittenden the footpath and other tracks are shaded switchbacks that hurry us past Biddenden and Sissinghurst gardens where the hats of the visitors bob up and down over the hedge.  Two apple orchards up and down the valley land us up in the Milk House which is the perfect pub to lounge around, drink shandy and restore energy looking back at the view we have crossed through.

The homing call is the windmill at Cranbrook  which we can see as we walk beside a large bramble grown security fence.

The staff at the George, in the teatime heat, have barricaded themselves in.  We are shown to  the maids’ rooms in the attic.  It is hot and we feel like ants and argue.  Cranbrook is a gem.  White close boarded houses, a grammar school, traces of a hat factory and an old temperance coffee house.  The past breathes on us, sends us to George Eliot.  Calm descends as the sun goes down. 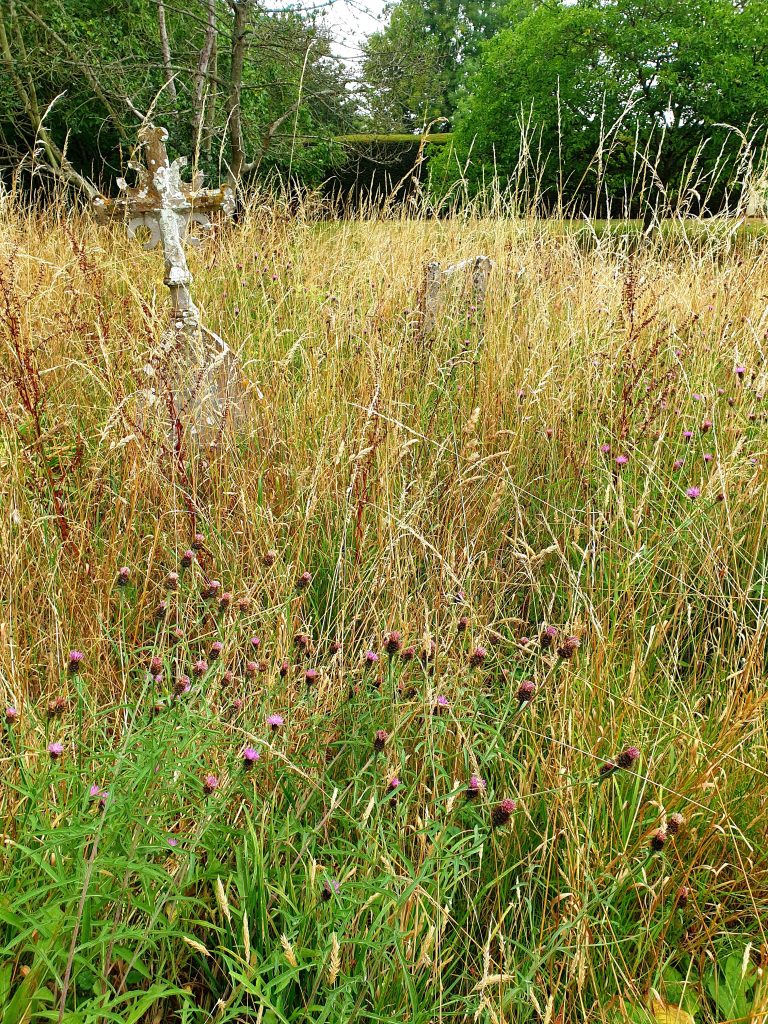 Day Three and at 5.30 marching begins.  No coffee in the George and we are keen to get to breakfast.  Due east in Ticehurst and with a large green stretch of Bedgebury forest to cross. By the way this woodland is just way too neat.  Magic has fled.  The snuffling of the busy A27 gets louder and we emerge from the trees, dive down a slope and into an entirely different view. Sussex,  I think.

We linger in Ticehurst over bacon butties at the Hungry Goat. Afterwards off on the smallest of lanes and on to a footpath connection all the way to 3 Cups Corner.  It is the day of the Garden of Eden, through fields of sunflowers, across bridges into a  wooded valley that hugs a stream.  We saw  farm machinery returning to nature, ponds too green to swim in, herds of deer, gardens of great design, shimmering late summer meadows and crossed the river Rother over  the Wreckery bridge.  Then it is uphill  through suckling herds, past heifers at the trough and a goat with a final path under young branches of hazel leaning in to make a cathedral path up to Burwash ridge. 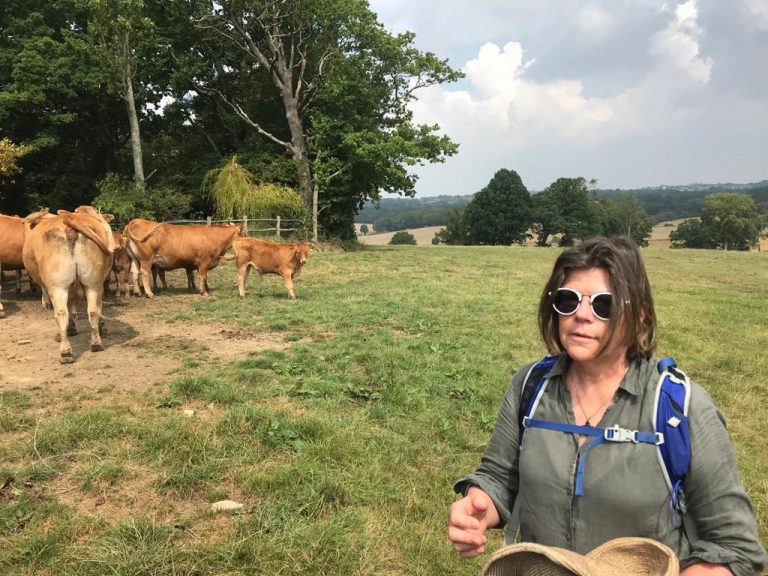 The afternoon saw us almost running down a black slope and then panting like hyenas up the other side to take refuge in Dallington Forest and finally I can sellotape this route onto the Sussex I know at Three Cups Corner – my brother drives by and catches us blackberrying.

Route planning is done outside as supper is cooked over the camp fire.  We can see the blue downs in the distance, match it up with close contours on the map and quail.  Can we go round rather than over?

Day 4.  We don’t but march like house carls straight for them  with the lower lands getting flatter and the roads and paths ever straighter.  The weather has broken and we walk in drizzle and defy farmers who have removed all the official footpath markers.  The landscape empties and we take our stride, post lunch, up a steady gradient past Bo Peep farmhouse and an almost empty carpark to the top of the downs,  There is nobody at all here and the cloud descends.  It is  a solemn Housecarl march through land that probably belongs to a barrow wight.  No sparkling views of the Channel and we practically stub our toes on Newhaven before we see it. 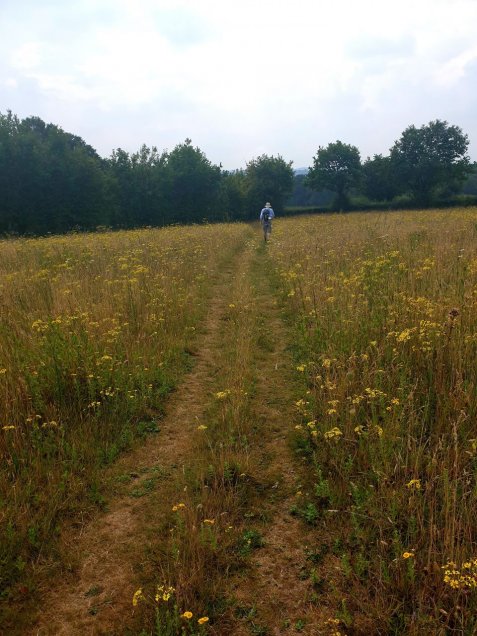